Please read this letter — I hope you can help Rifleman David 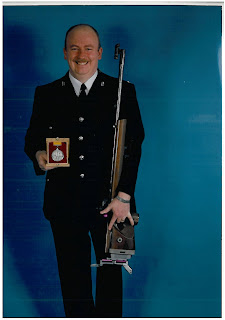 Fastyr mie (I hope this reaches you after midday).
Please allow me to introduce myself and give you some background into why I am writing to you as Manx descendants far from home. My name is David William Moore and I am striving to become the first Manxman to win two medals on behalf of the island at Commonwealth Games level.
In 1998, I represented the island at the Commonwealth Games held in Malaysia. I compete in the small-bore rifle event known as 50 metre men’s prone. At these games following intensive training and backing from the island, I won a silver medal in the individual event, the first ever silver medal won by the island.
Following this, in 1999 in Stockholm and in 2001 in Indianapolis, USA I competed in the World Police & Fire Games on behalf of the Isle of Man Constabulary were I have been a serving officer since 1992. At these two games I won two separate gold medals for the island which resulted in me being inducted into the Isle of Man Hall of Sporting Fame currently housed at the National Sports Centre in Douglas.
At this point I was looking forward to competing at the 2002 Commonwealth Games to be held in Manchester, England. Unfortunately I was injured whilst at work, when I was struck by a motor cycle whilst on duty. This resulted in some spinal damage. Fortunately, I have been able to continue with my work, and following a number of years of non frontline duties, and physiotherapy. I have now returned to full health and again taken up my chosen sport in an effort to do what no other Manx competitor has ever done, and take a second medal on behalf of the Isle of Man.
You will appreciate that whilst the island is large in heart and culture, there are limited opportunities to obtain backing from interested parties in the form of sponsorship. For me to try and complete my task will take a great deal of time and finance. I self funded my Silver medal preparations in 1998, using all my leave and spare time in training and qualifying. My family bore the brunt of this, in that I was working, training or competing full time.
I have a very supportive family with my wife Fiona and my two boys Ethan (17) and Rhys (14) backing me fully. This being said, I will have to again start the qualifying procedure during the next 18 month’s that will give me the place on the team to try and full fill my dream. The requirements for being selected are stringent as with most world class events. During the next 18 month’s I will have to travel off the island at least 20 times to attend various UK and International events to allow me to complete the qualifying scores set down.

On the island, our sports men and women strive constantly to be the best, to this end our local governing body has set our qualifying scores to reflect this. The governing body for shooting sports, the ISSF, sets the international qualifying scores for member countries to obtain places at the Olympic Games at 585 ex 600. Here on the Isle of Man, we have set our score even higher than this to prove that we can compete with the best in the world. On the island the minimum qualifying score for my event is set at 590 ex 600, 5 points higher than qualifying for Olympic Games.

During the last 4 months I have met and passed this score on four different occasions, with scores of 591 x 2, 595 and 598 which equals the Manx record. In September this year I have been picked to represent the Island at the Commonwealth Shooting Federation (European Division) Championships in Gibraltar between the 23rd to the 30th September 2008.

You may well ask how you could assist me in my goal, but I know from experience, that Manx is something in the blood. I had a great uncle who emigrated to New Zealand in the 1920’s and two great aunt’s who moved to Canada and the USA after WWII, one became a Nurse, the other a Doctor. But they never lost their Manx roots, and returned to the island on a regular basis right through into the old age. I on a number of occasions when younger travelled to see them and all my cousins around the world. I am seeking backers, not corporate sponsors, but Manx backers who have an interest in seeing another Manx person perform on the world stage and beat the best the rest of the world has to offer.

I would be grateful to hear from you or those members of your organisation, who may be able to assist me with some backing. If you are at this time unable to help me in this, then even a short note or letter of encouragement would be gratefully received with the knowledge that Manx descendants everywhere are wishing me well.

I have also included a small photograph of me in full dress uniform, taken after I won my silver medal in 1998.
I look forward to hearing from you.
Gura mie ayd. (Thank you)