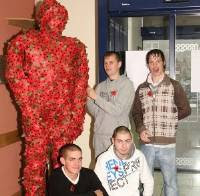 A SEVEN foot tall Poppy Man stands inside the foyer at Ramsey Town Hall, marking the start of this year’s Poppy Appeal. The iconic figure made of wire and poppies was created for Ramsey branch of the Royal British Legion by four young men from the town who put in hundreds of hours of work attaching thousands of poppies to a wire frame.

Poppy Man statues such as this can be seen all over the British Isles, raising the Legion’s profile and symbolising the support given to those who serve or have served in the armed forces. Poppy Man has appeared on a plinth in Trafalgar Square and, most recently, holding hands with a young child whose father was killed in Afghanistan. The Ramsey figure is the first in the Isle of Man.