Another reminder that motor cycle racing is is exciting because it it dangerous and in this sad case, fatal. 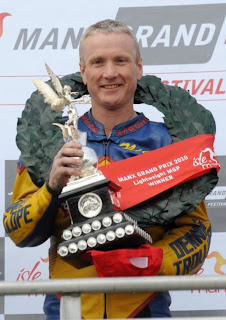 The 49-year-old, from Boston in Lincolnshire, was involved in an incident at Greeba Bridge. He was on his 250cc Yamaha in the Junior session.
Mr Kent was an experienced competitor who had been racing in the Manx Grand Prix since 1986 and won the Lightweight race in last year’s meeting, his first victory on the Mountain Course.
He also won the John Goodall Spirit of the Manx Award, which recognises sportsmanship, endeavour and commitment.

Bill Bennett, chairman of MGP organising body the Manx Motorcycle Club, said: ‘Neil was a hugely popular competitor at the Manx Grand Prix and his victory after almost 25 years of racing in the meeting was universally popular. He was also a hugely appropriate choice for last year’s John Goodall Spirit of the Manx award. He will be sorely missed.’

The club extended its deepest sympathy to his friends and family. Mr Kent was single and his next of kin have been informed. IOMToday