Port Erin: Wildflower Hotspot of the Isle of Man 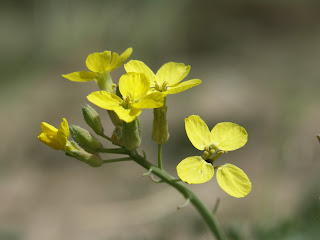 The Isle of Man Flora Group has been working for two years to survey the Island’s wildflowers, with forty volunteers working for hundreds of hours to scour hundreds of square kilometres of the Island. While the survey will last another three years before the final results are published, some preliminary data is giving us a good shape where some of the Island’s best areas for wildflowers are.
Three areas are well ahead of the rest with Port Erin coming out ahead with 486 species recorded since records began, coming just two ahead of Ramsey, with Sandygate not far behind at 481.
Port Erin’s amazing 486 records include Manx rarities such as spring sandwort on the mine deads and narrow-fruited watercress in Athol Park. As well as lots of coastal, saltmarsh, woodland and grassland plants. Garden plants that have gone wild are an interesting feature in Port Erin with species such as the 10’ high giant viper’s bugloss occasionally springing up from buried seed. Ramsey’s mix of suburbs, saltmarsh and sand dunes made it score high and Sandygate contains some of the best wetlands on the Island and contain more records of native plants than any other area. With records still to come in, some of these areas could reach 500 species before the survey finishes.
As well as pinpointing wild flower hotspots the flora survey has also discovered plants never before recorded on the Island such as tor-grass that is growing wild in Jurby and rediscovered plants long thought to have been lost.
Our 2011 surveying season kicks off with a spring social at the Douglas iMuseum on the 29th March. If anyone is interested in becoming a wildflower surveyor, contact Andree Dubbeldam on 434251.
Photograph:(Isle of Man Cabbage, A plant first discovered in 1660 in Ramsey, where it still grows today)
The Isle of Man Flora Group is a partnership of individuals from many government and non governmental organisations on the Island. It is self funding and operates independently, with The Manx Wildlife Trust holding its budget and supporting its volunteers.
The Manx Wildlife Trust is the leading nature conservation charity on the Isle of Man and whilst it is a fully independent, Manx charity it also benefits from its partnership with 46 other Wildlife Trusts throughout the British Isles.
Contact:  A Dubbeldam, Wildflowers of Mann Project Manager )11 441 624 801 985.