Kelly McCarthy Posted on March 6, 2012 Posted in Uncategorized
With early spring flowers about to blossom it’s also time for the annual Celtic festival season to get under way, with the ‘Porthcawl Inter-Celtic Festival’ in Wales inviting festival-goers to join them in shaking off that winter malaise.
Organised by Cwlwm Celtaidd (a member of the Bridgend Association of Voluntary Organisations) the ‘Porthcawl Inter-Celtic Festival’ is very much a family-friendly event, bringing together talented singers, musicians and dancers from the main Celtic nations and held as close as possible to St David’s Day at the beginning of March.
Firmly established on the burgeoning festival calendar, it’s a weekend of non-stop concerts, dancing, workshops and legendary sessions, with local dance group ‘Perree Bane’ flying the flag for the Isle of Man. 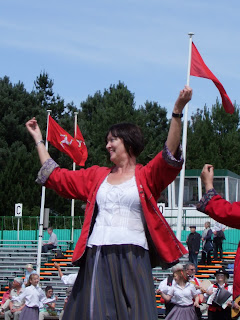 Now in their 30th year and currently based in Ballasalla, ‘Perree Bane’ aims to keep alive the lively repertoire of traditional Manx dances, using innovation as a key component. With a strong core membership and a children’s section they offer a versatile selection of informal or staged dance performances, workshops and ceili dances with the addition of traditional music and song.
Their striking, colourful costumes attract much attention both on and off the Island with the red stripe in the women’s woollen skirt, based on the ‘Juan y Clearie’ weave, contrasting expertly with their attractive short red jackets (beggan ruy).  The men’s costume also carries historical significance, using a white collarless jacket (from which the name of the group is taken) which was thought to have originally been an ordinary garment reversed to show the white lining for special occasions. Their distinctive hats, meanwhile, together with their brown trousers, both use wool from the unique Manx Loghtan sheep. 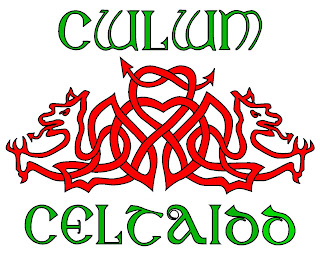 Porthcawl became a popular seaside resort after World War I and has now become part of the Glamorgan heritage coast, with access to many other scenic destinations in South Wales.
Many of the weekend activities will take place in the palatial setting of the Grand Pavilion, viewed as the most striking building on the seaside resort’s esplanade. Built in 1932 and originally intended as a Palm Court, its attractive facade and octagonal dome dominates the seafront at Porthcawl where it operates as a multifunctional venue.
This makes it an ideal setting for the ‘Porthcawl Inter-Celtic Festival’ with the main hall providing a versatile sprung dance floor and a recently updated sound and lighting system, which extends to a second entertainment area for more intimate gatherings. Some of the best music sessions of the festival will also be found here at the spacious café bar which boasts panoramic views of both the promenade and Bristol Channel. Close to all town amenities, workshops, fringe events and late night get-togethers will take place at the nearby Brentwood Hotel.
www.homepages.mcb.net/mann (for more details about Perree Bane)
www.cwlwmceltaidd.com
Valerie Caine
© March 2012 (inc photos)
(Courtesy of Manx Tails)