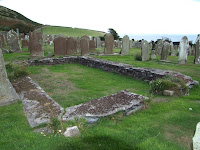 ‘Praying the Keeills’ is a unique opportunity to discover some of the Island’s rich heritage of early religious sites whose remains lie scattered across the Isle of Man, and share in moments of quiet reflection and informal prayer.
Organised by a taskforce of representatives from each denomination, ‘Praying the Keeills’ was the brainchild of the Right Reverend Graeme Knowles, a previous Lord Bishop of Sodor and Mann, in 2006.
Viewed as a time to reflect on the beauty and significance of these ancient sites, ‘Praying the Keeills’ has now become established as an annual pilgrimage with a full calendar of events to tempt a cross-section of the community. Keen walkers will be encouraged to put their best foot forward and combine a number of walks with visits to a wide selection of keeill sites across the Island at the Cringle Reservoir, Fort Island (St Michael’s Isle), Corrody and St Patrick’s Chair which is thought to be one of the Island’s earliest Christian monuments and possibly a heathen burial site or meeting place. There will be lots of opportunities for picnics, faith suppers and to learn more about Manx history relative to religious sites on the Isle of Man, courtesy of local historians Frank Cowin and Liam O’Neill. 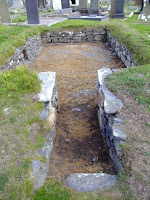 Keeills were built of earth and stone and often situated on a mound surrounded by a circular burial ground and are associated with pre-Christian sites. A number were either built over, or transformed into Bronze Age Cairns, but few survive intact and many have been ploughed over by industrious farmers. Once an important part of Island life they served as family chapels, wayside shrines and places of retreat, or hermitage. It is estimated that as many as 250 keeills marked the land at one time with none of them thought to be older than the eighth century, although the site itself and surrounding burials may be dated back to the sixth century, or earlier. 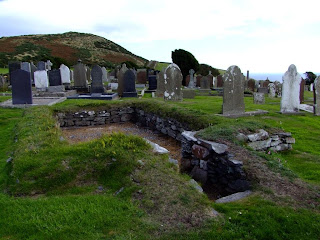 This year’s celebration will be launched with a service at Ballagarey Methodist Chapel in the village of St Mark’s, followed by a circular walk from the village to the keeill known as Cabbal Dreem Ruy near the Cringle Reservoir, before heading back through the Corlea Plantation.
St German’s Cathedral in Peel will also be providing a number of special events and services during the month of May to complement those provided by the organisers of ‘Praying the Keeills’.
www.prayingthekeeills.org
Valerie Caine © May 2011 (inc photos)