Presentation by the 1st Battalion, Duke of Lancaster’s Regiment. 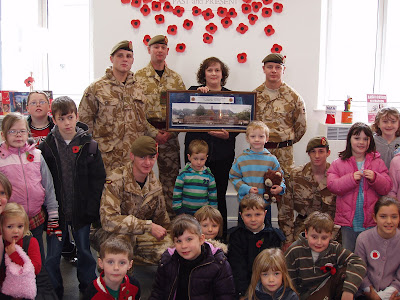 Sergeant Dave Cameron from Cumbria and three Isle of Man soldiers, Kingsman John Quaggan, Kingsman Stuart Dawson and Kingsman James Kelly, who are in the Island representing their battalion for Remembrance Sunday, are presenting the library with a gift of a framed photo in return for the young members’ support during the Battalion’s tour of duty in Basra, Iraq, which came to an end this summer. Members sent the soldiers drawings, gifts and letters of support, which boosted the soldiers’ morale while they were in Iraq.
The Regiment – the North West’s Infantry – recruits from Cumbria, Lancashire, Merseyside, Greater Manchester and the Isle of Man. While in the Island the soldiers are also attending a civic dinner and taking part in Douglas’s Remembrance Sunday ceremony, where they will lay a wreath.