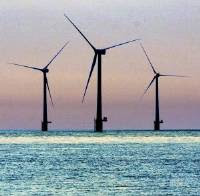 Interestingly, islanders are being invited to view the proposals for offshore wind farms in the Irish Sea.  Interesting because the power that could possibly be generated by these windmills would be routed back to the UK. The Comments section under the news item makes interesting reading.

Centrica Renewable Energy, the company which was awarded development rights in January, will be attending the Department of Trade and Industry’s Energy Expo at the Isle of Man College on March 19 and 20. The company, part of British Gas, will provide information about its plans for the wind farms, which could be situated about 12.5 miles from the Island’s coast.

Trade and Industry Minister David Cretney MHK said: ‘I hope that people will take the opportunity to view Centrica’s proposals. We are grateful to them for considering the views of the local community as part of the public consultation process as well as offering to outline their proposals and to answer any queries.’

The Irish Sea zone, nine miles off Anglesey, North Wales, covers an area of 2,200 square kilometres and could house a number of wind farms. The area has the capacity to produce 4GW, which is enough to power about three million homes. Site selection will be based on a number of factors, including water depth, connection to the electricity grid, existing marine activities and any environmental constraints. It is one of nine zones around the British Isles granted a licence by the UK Government as part of a £100 billion project designed to usher in a new era of green energy for Britain.

For more information go to www.centricaenergy.com/renewables