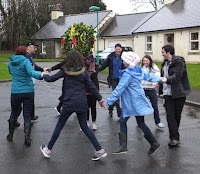 Despite atrocious weather conditions, a number of hardy souls braved incessant rain to join gatherings across the Island for the traditional Hunt the Wren on St Stephen’s Day (Boxing Day).

Although other cultural pursuits may have lapsed over the years, this annual procession of dancers and singers, accompanied by a bush of evergreens and other more colourful decoration, parade through the streets and lanes of some of the main towns and villages of the Island.
In the midst of the bush hangs a small wren, these days not killed specifically for the purpose, but typically a bird who has met a natural death, or a simile.
Those making donations to charity were rewarded with a choice of coloured ribbon, rather than a feather from the recently deceased bird, in the hope of attracting good luck for the following year. They’re particularly efficacious in the event of shipwreck. Or witchcraft.

But tradition dictates that it should all be brought to a close by noon, after which a feather (or ribbon) is deemed to be worthless. Why this specific time is thought so important is open for debate amongst scholars and historians, although E. Kermode remarked in his unfinished manuscript, subsequently titled Celtic Customs, that, by this time, the unfortunate bird is almost featherless. 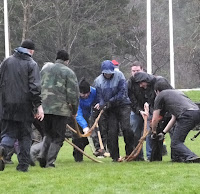 Although the rain persisted throughout the day, it did little to stall the enthusiasm of those heading for the front green at Tynwald Hill in their quest of the local game of Cammag.
Revived in recent years, this annual skirmish involves teams representing both the north and the south of the Island, but has few rules.
It’s a game of three halves and a singular focus on a sometimes elusive ball, known as a crick.

A small gathering of spectators looked on as those from the north took a resounding victory; winning 7:1.

The game was followed by a music session at the Tynwald Hill Inn, where everyone could relive the game, discuss technique and seek shelter from the unremitting rain.
In the coming weeks look out for details of a special Cammag Match to be held on the Isle of Man during the International Celtic Congress in 2016.
Valerie Caine