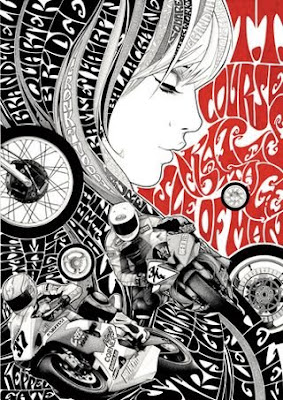 Some kind soul posted a comment regarding the Gaelg wiki browser: http://wikibrowser.net/dt/gv/ I cannot make it work but it’s probably set for Windows.

Summer of Love: It’s been 32 years since the Summer of Love, but that cultural touchstone is alive and well in the work of artist Adam Berry. (Seen here.)

Berry, 27, wasn’t even a glimmer in his parents’ eyes when the hippies converged on San Francisco. He’s never been to California. But the left coast’s psychedelic sensibility has somehow found its way across the Atlantic and landed in Berry’s art, which melds the come-hither vixens and melting typography of this long-ago, far-away era with the iconography of his home country, the Isle of Man.

During this year’s TT, Berry’s artwork was shown alongside a mods and rockers exhibit put together by London’s famous Ace Cafe – another motorcycle-centric, British Isles venue – and one that has expressed interest in showing Berry’s work next year.