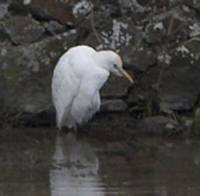 This is the first ever sighting of a cattle egret on the Island or so the paper says. This was taken in Port Erin. Apparently it’s a type of heron.

From Wikipedia: Originally native to parts of Asia, Africa and Europe, it has undergone a rapid expansion in its distribution and successfully colonised much of the rest of the world. It is a stocky white bird adorned with buff plumes in the breeding season which nests in colonies, usually near bodies of water and often with other wading birds. The nest is a platform of sticks in trees or shrubs. Unlike most other herons, it feeds in relatively dry grassy habitats, often accompanying cattle or other large mammals, since it catches insect and small vertebrate prey disturbed by these animals.