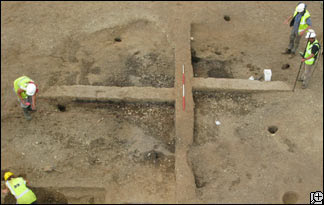 The Ronaldsway house is creating a storm in archaeological circles. This is from Discovery News.

Aug. 11, 2009 — The remains of a 9,000-year-old hunter-gatherers’ house, uncovered during construction at an airport, have been unearthed in Great Britain’s Isle of Man. The house was surrounded by buried mounds of burnt hazelnut shells and stocked with stone tools, according to archaeologists working on the project and a report in the latest British Archaeology.

It is the earliest known complete house on the Isle of Man and one of Britain’s oldest and best-preserved houses, according to the report. The find also offers a glimpse of domestic life 4,000 years before Stonehenge.

Based on the many ancient shells found surrounding its exterior, the home’s first inhabitants must have eaten a lot of hazelnuts.

“There were presumably so many hazelnuts near the house as a result of processing and consumption of these within the building,” project manager Fraser Brown of Oxford Archaeology North told Discovery News.

“They may have been burnt because the shells were discarded into a fire after consumption of the fruit,” he added. “When the hearth sweepings were cleaned from the building, the burnt nutshells and all else were cleaned to the periphery. Hazelnuts would have been an abundant and highly nutritious source of food that could easily be gathered in the autumn and stored for consumption through lean winter months.”