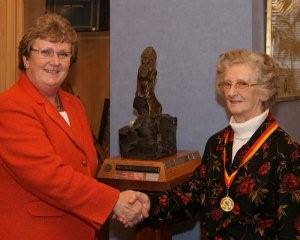 The Reih Bleeaney Vanannan is an annual award made by the Manx Heritage Foundation to a person, or group, who has made the most outstanding contribution to Manx culture. This year Joan Caine of Peel was awarded the trophy in recognition of the many years she has spent teaching and encouraging others to learn the Manx language. A large part of this time has been spent as a member of Caarjyn ny Gaelgey (Friends of the Manx Language) and organising a variety of Manx classes from beginners to fluent speakers in St John’s.

She also arranges a number of fund-raising activities and has also served as the secretary of the Gaelic Broadcasting Committee and as a member of ‘Cooinceil ny Gaelgey’ (Manx Gaelic Advisory Council), the official body which provides translations and new terminology in Manx.

A panel of assessors is appointed by the Manx Heritage Foundation which represents a number of Manx cultural organisations. Inspired by Manxman Stephen Quayle of Kidderminster the Reih Bleeaney Vanannan is viewed as the natural successor to the Manannan Trophy and was awarded for the first time in 1987.

The trophy, designed by the late Eric Austwick, displays the figure of the sea god Manannan standing on a sample of Pooil Vaaish marble resting on a plinth. It also contains traces of quartz from South Barrule, one of Manannan’s fortresses, and a brooch of Laxey silver presented by cultural field worker Mona Douglas. Joan will hold the trophy for one year, but will also receive a medal designed locally by Jennie Kissack. She also gets the initials R.B.V after her name, the only uniquely Manx honour that does this.

The award was presented by the Chair of the Manx Heritage Foundation The Hon. Anne Craine MHK who said, “Joan’s efforts have resulted in Manx having a more secure position in the community than it has had for the last fifty years, and it is certain that without her tireless work there would be fewer speakers of Manx Gaelic”.