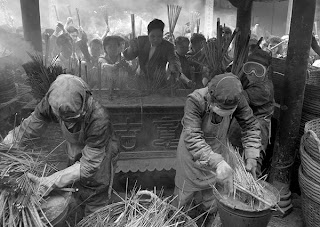 From the blog in January:
Mr Guan Xing started taking photographs in 1994. He particularly enjoys photographing everyday city scenes and stage performances. During 1997, 1998 and 1999 he was nominated ‘Best Photographer of the Year’ by ‘China Photographer’. The photographs being exhibited were taken between 2004 and 2007 on the streets in Guangzhou (in Southern China) and in Changchun (in Northeast China). The pictures are records of moments in life. The Isle of Man’s Honorary Representative in China, Richard Hewitt, said:
‘In the past two years, Tynwald Day Celebrations in China have showcased the work of local artists from Guangzhou in a way that linked with the Isle of Man. A dance based on the 3-Legs theme was commissioned and these photographs were displayed as they were destined to be shown on the Isle of Man at Chinese New Year.’

Well, here are a couple of his photos. 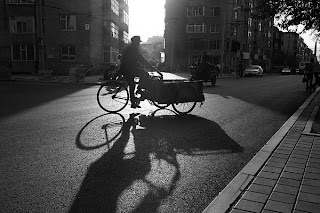