Now he has taken up the unusual art of chainsaw carving, transforming dead trees into works of art.
From wizards to wildlife, his huge wooden sculptures are becoming a popular part of the Manx countryside. 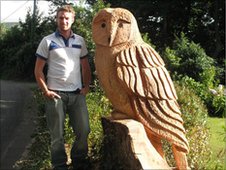 His latest creation is a seven foot angel which will be unveiled at Mannifest on Friday 6 August 2010 as a symbol of the festival spirit.
“It is massively physically and mentally challenging, any cut could ruin the entire thing. You have to have a lot of patience, attention to detail and a bit of imagination” said Nick.

Chainsaw art originated in America and combines the modern technology of the chainsaw with the ancient art of woodwork.
For Nick it is about conserving the natural landscape and making the most out of our resources.
Nick said: “Everyone thinks being a tree surgeon means you love cutting down trees but most of us have a soft spot for them.
“For me the carving is a progression of that. Rather than a tree coming down and being burnt it can be transformed into something new.” Nick first tested his skills as an artist by carving a face into the trunk of a tree belonging to his friends Sue and Gary Quilliam.
“It gave me a big boost of confidence and they asked me to carve a wizard out of a dead oak tree in their garden.”
Tourist attraction
The 12 foot high wizard now sits by the roadside in Sulby Glen and has become an attraction in its own right.

Sue Quilliam said: “There’s been a massive amount of traffic along this road with people just coming to see the wizard. It’s becoming a tourist attraction.
“I’d wanted it done for eight years but to find both artistic talent and chainsaw skills is unique. He’s incredible”
Nick is hoping to put together a wooden wonderland exhibition of sculptures in time for Christmas 2010.

“It’s something I would like to make my profession. I would love to do this day in day out.”
Nick will perform a live carving at the Royal Manx Agricultural Show on Friday 13 and Saturday 14 August 2010.