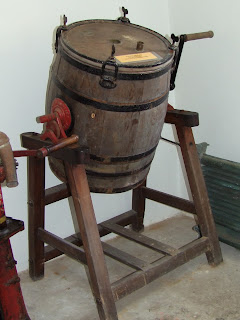 The changing of the calendar from Julian to Gregorian brought uncertainty on the Isle of Man as elsewhere, and even now some Manx people have a tendency to refer to both calendars when talking about annual celebrations, but the festivities associated with Hollantide are still largely associated with the original date on the Julian calendar.
Hollantide has stuck almost religiously with the 12th November and was historically a period of change for many people, although Feltham records that a Hollantide Fair was at St John’s on the 1st November. Its exact whereabouts are obscure, but it is said to have been held up to 1872, or later, but is now a thing of the past. Buildings were leased and rents demanded on this day as workers took on new masters for the following twelve months. Known as an old Manx quarter day, cattle were brought indoors for the winter and the harvest safely gathered in, but for the large numbers of farm hands it was also a time of insecurity. In earlier years Hiring Fairs were a common sight throughout the Island on this day, with many of the menfolk in trepidation of what the future held for them in terms of employment or shelter.
The fortunate ones would reside in the farm cottage, but others were left with little option but to sleep in the outhouses with the livestock. A hired worker who wished to try his luck elsewhere would be obliged to return the shilling given to him by his employer at the outset of their agreement.
It is said that the biggest Hiring Fairs were held in Douglas, Maughold and Ramsey, where crofters’ wives earned a little extra income by selling eggs and home-made butter. Hollantide Fairings (gingerbread biscuits) were also a common sight, although largely forgotten about today. However, not everyone was happy with this annual event, with fairs in the nineteenth century described as ‘rank, dirty and distasteful’!
Also known as Manx Laa Souney, Shenn Laa Souney and Old Hollantide Day, Sophia Morrison and Carl Roeder recorded in their book ‘Manx Proverbs and Sayings’ “Cre-erbee yn airt ta’n gheay Shenn-laa Souney, shen yn airt bee eh daa ayrn jeh’n vlein. When translated we are told “Whatever airt the wind is at on Old Hollantide Day, it will be at that airt two-thirds of the year”.
Times have changed. Less people now work in agriculture and the old Hiring Fairs have outlived their usefulness, with many individuals unaware of this once crucial marker on the Manx calendar.
Valerie Caine © November 2011 (inc. photos)