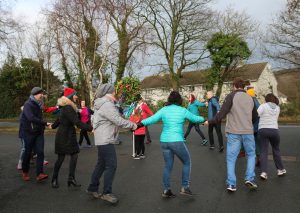 It’s a busy time for those keeping Manx traditions in the spotlight on the Isle of Man when St Stephen’s Day (Boxing Day) dawns, with a surge of interest in events this year providing a welcome boost for the future of these important occasions.

Hunt the Wren often includes many happy revellers from across the Island, ensuring that this long-held tradition remains unforgotten in an increasingly global climate. Fortunately the necessity of using a recently killed bird as traditionally required has been superseded by something less blood thirsty, with coloured ribbons replacing feathers of the bird for good luck as singers and dancers move freely amongst the villages and towns.

Additionally this year Isle of Man Stamps and Coins have also released a unique £2 coin capturing the striking image of the little wren, and available as either a single product within a protective wallet, or within a limited edition card featuring images from the recently produced Manx Folk Traditions stamp collection, a Hunt the Wren stamp and a unique first day issue postmark.

Maxine Cannon, Isle of Man Stamps and Coins General Manager, commented, “We are pleased to present this beautiful and festive £2 coin themed on a Christmas tradition that is still valued on our Island today, which perfectly illustrates this custom.” 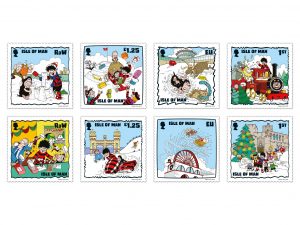 Meanwhile, there’s still an opportunity to enjoy the Island’s Christmas stamps celebrating eighty years of the Beano, with Dennis and Gnasher visiting several well-known destinations on the Isle of Man, drawn exclusively by their official artist Nigel Parkinson.

But later in the day there was a great opportunity to work off those extra calories by taking part in the annual Cammag match on the old fair field at St John’s, where teams from the north and the south battled for supremacy in a sport which may well be familiar to those in neighbouring Celtic nations who play shinty or hurling. Although the game lost favour to football at the turn of the nineteenth century there has been a resurgence of interest in the sport in recent times.

The day concluded with an uplifting music session in the Tynwald Inn which included some of the Island’s finest musicians.