Ronaldsway, Cav and the French 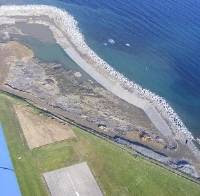 BARGES carrying thousands of tonnes of massive boulders have been regular visitors to Derbyhaven Bay since April. The three barges are being towed 640 miles from Larvik on Norway’s south coast with cargoes of rock armour for the Isle of Man Airport runway extension project. Story

MARK Cavendish today won his fourth stage of this year’s Tour de France and now has a total of eight Tour wins to match Barry Hoban’s record for a British rider. Thor Hushovd (Cervelo Test Team) lost the green jersey after finishing fifth on the 192km stage from Vatan to Saint-Fargeau.

Cavendish is back in the green jersey and now has 176 points to Hushovd’s 169. The French riders are now trying to assert that Cav is a racist. Didn’t they also used to have a go at Lance? They should take a leaf from the American’s book: hold a world series and only invite the host nation to compete.