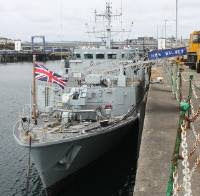 HMS Walney, hot from clearing mines in the Arabian Gulf (where this is being typed!) is in Douglas to promote the activities of the Royal Navy. It is one of two navy vessels in Manx waters. The other is fast patrol craft HMS Charger, which arrived in Douglas Bay on Sunday.

They are supporting members of the Royal Navy Presentation Team who gave a free public talk on the role of the Royal Navy which, given that we’re surrounded by water makes some sense. During the visit, the ship will be visited by schools, members of the House of Keys, Lieutenant Governor Vice-Admiral Sir Paul Haddacks and Douglas Mayor, Dot Pitts. The crew will also be presenting a check to the children’s hospice, Rebecca House. There are more details here.