There’ll be a special concert at the Erin Arts Centre later this month, when Manx Gaelic singer Ruth Keggin teams up with Anna Czajkowska for a flute and piano recital.

Although originally from Poland, Anna (a private music teacher) now lives on the Isle of Man. Awarded a Master’s Degree in music performance (piano), Anna has performed a wide variety of chamber music throughout both Europe and the USA, as a soloist and in partnership with various ensembles.
Ruth studied music at the University of York, under the tutelage of celebrated flute teacher Edwina Smith. However, she ultimately chose to specialise in singing, focusing on Gaelic song, for which she is better known these days.
Anna and Ruth got to know each other earlier this year and soon discovered a shared interest in musical taste. As both musicians were also keen to perform, it wasn’t long before they teamed up professionally. 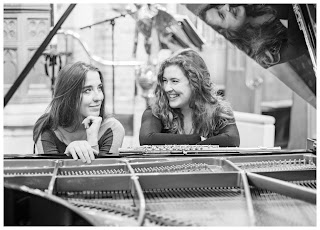 They will be performing a varied and interesting programme of music for flute and piano, although Anna will also present a selection of solo piano pieces by composers such as Debussy.
The concert starts at 7.30pm on Friday 20 November.
Tickets priced at £8 (adults) £2 (under 18) are available from the Box Office at the Erin Arts Centre (open 10.30am – 4.30pm Wednesday to Friday), or from Ruth at www.ruthkeggin.com

(Due to ill health this has now been postponed but it’s hoped to reschedule early in the New Year.)
Valerie Caine