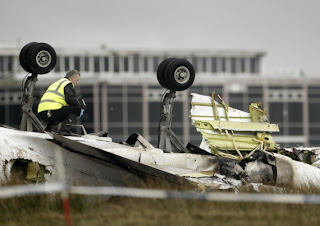 TWO black boxes have been recovered intact from the wreckage of the Manx2 aircraft that crashed at Cork Airport and a full air accident investigation has been launched into the cause of disaster. (IOMToday)
It is expected that a preliminary report will be produced in a month’s time. Six people died and six were injured – four seriously – when the Manx2 flight NM7100 crashed in thick fog during its third attempt to land on Thursday.
Eyewitnesses reported hearing a loud bang as the Metroliner aircraft hit the ground at the western threshold of the runway, flipping onto its roof and bursting into flames.
Debris was left scattered across the runway. Miraculously, two passengers managed to crawl from the wreckage and escaped with only minor injuries.
A full independent investigation has been launched by the Air Accident Investigation Unit (AAIU) of the Irish Republic’s Department of Transport.
Two black boxes have been recovered from the wreckage of the aircraft.
‘We were successful in recovering the so-called black boxes – the flight data recorder and the cockpit voice recorder, which will be crucial to my investigation,’ said Leo Murray of the AAIU.
‘We have also impounded all the air traffic records at the airport.’
Manx2 chairman Noel Hayes, speaking at the hospital after visiting the crash scene, said: ‘The black box from the aircraft and the voice recorder have been located intact so we hope a lot of the information will be made available very quickly to find out exactly what happened and what the cause was of the tragic accident.
‘I’ve met the lead investigator and the timescale is for a preliminary report in about one month and a full report in 12 months. Clearly they will leave no stone unturned.’
Investigators from Ireland, Britain, the US and Spain are working together to establish the cause of the crash.
Four investigators were at the scene within an hour and a half, completing a site survey at Cork and carrying out a preliminary inspection of the wreckage.
The Irish government’s minister for transport, Pat Carey, confirmed preliminary findings would be made public within weeks.
He applauded the work of all the emergency services, adding that the death toll could have been higher without their work.
The Irish Aviation Authority says it will co-operate fully with the AAIU investigation.
Infrastructure Minister Phil Gawne MHK said his department and Isle of Man Airport were offering every assistance to Manx2 and officials from the Air Accident Investigation Unit.
He said: ‘It is far too early to speculate on the cause of the incident, and at the Isle of Man Airport it is business as usual for all flights.’
Strictly speaking, Manx2 is not an airline but an air operator. In what is fairly standard practice in the aviation industry, it charters European airlines holding Air Operator’s Certificates to operate its scheduled services for which it provides the tickets.
It is those airlines that are responsbible for the aircraft, crew, maintenance and insurance.
Mr Hayes said that the Spanish-registered and owned Metroliner had received its full maintenance check in Barcelona only the week before and had been fully signed off.
Cork Airport has a precision instrument landing system that enables safe landing in reduced visilibility due to fog, rain or snow where the ‘runway visual range’ is not less than 300 metres.
This is a category 2 ILS whereas Ronaldsway has a catagory 1 system that enables safe landing in runway visual range of not less than 550 metres.
In each case, a suitably-equipped aircraft and appropriately qualified crew are required.
No other aircraft have been grounded as part of the air accident investigation, the Metroliner, which was based at Belfast specifically to operate the Cork service, being the only plane of its type flown under the Manx2 banner.