The sinking of the Isle of Man Steam Packet Company’s vessel Ellan Vannin in 1909 proved to be the worst day in the company’s history, but despite time’s intervention this tragic event remains deeply etched in the memory of many Manx people.

Recognised as the oldest mail steamer in the world at that time, the ill-fated Ellan Vannin began life as a paddle steamer, bearing the name Mona’s Isle II before her conversion to a twin screw steamer. She was mocked by some, although Manx Sailors regarded her as the safest vessel afloat, bestowing her the colloquial name Li’l Daisy.

A veritable workhorse, the Ellan Vannin departed from Ramsey in the early hours of the morning of the 3rd December upon her regular journey to Liverpool with an assorted cargo, fourteen passengers and twenty one crew members. Prepared for an estimated journey of seven to eight hours, the Ellan Vannin set sail in typical stormy, winter weather with Captain Teare, a cautious master, at the helm. 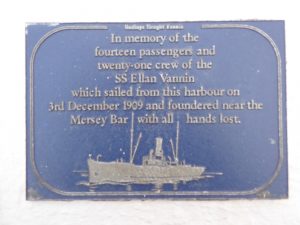 Unfortunately the weather deteriorated rapidly, with hurricane force winds challenging the vessel as she ploughed determinedly towards the English coastline.

She reached the Bar Lightship where the waves reached twenty four feet in height, but sank in the waters of Liverpool Bay. There were no survivors and only seventeen bodies recovered. Word of the disaster soon reached the Island, where thousands of people waited for news and social events were cancelled. At the suggestion of the Lieutenant Governor, Lord Raglan, 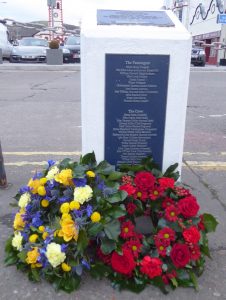 the Ellan Vannin Disaster Fund was instigated, boosted by a generous £1,000 donation by the Isle of Man Steam Packet Company. Fundraising events around the world contributed much to the fund, and by the spring of 1910 stood at almost £13,000.

The Mersey Docks and Harbour Board raised concerns that the wreck was a danger to shipping, and was subsequently blown up on the 6th April, 1910.

Captain Teare’s actions in the teeth of the storm were criticised by some, and the subsequent official report issued by the Board of Enquiry concluded that the Ellan Vannin had been sunk by heavy seas. The Isle of Man Steam Packet Company, however, believed it was the result of a collision. 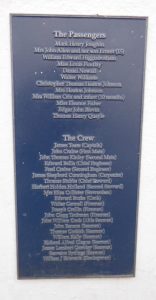 The recent Service of Remembrance, held at the vessel’s memorial on Ramsey quayside and organised by Ramsey Town Commissioners, began with the commissioners’ Deputy Chairman Luke Parker, before the vessel’s tragic story was recounted by Lieutenant Lee Clarke RNR AFRIN (Secretary for the King George Fund for Seafarers – Seafarers UK). Prayers were led by Father Brian O’Mahony, followed by observation of a minute’s silence and the naming of both crew and passengers by John Watt (Commercial Director of the Isle of Man Steam Packet Company), together with Mrs Margaret Brown and Mrs Jill Dunlop; great grand-daughters of First Mate John Craine.

Wreaths were laid by representatives of the Isle of Man Steam Packet Company and Ramsey Town Commissioners, with closing prayers by Father O’Mahony.

Warm wishes were extended to Harry Edmondson, who had played a significant role in keeping the story of the Ellan Vannin in the public eye, but was unable to travel to the Island for the event due to ill health.