The Manx festival ‘Shennaghys Jiu’ has come a long way since its inception in 1998, but continues to provide an opportunity for young musicians and dancers to gather together in a non-competitive environment and enjoy themselves on an informal basis.
Born as a result of a late-night conversation between James Alexander, leader of the Fochabers’ Fiddlers and a couple of Manx dancers, this year’s festival will be held 29 March – 2 April with the generous support of the Manx Heritage Foundation, the Isle of Man Arts Council and other local businesses.
Predominantly based in Ramsey with an occasional event in other parts of the Island, this year’s festival will follow a tried and tested format, bringing a mixture of concerts, music sessions, ceilidhs and workshops to a range of venues. Committed to presenting a varied programme, recent innovations such as the unplugged (acoustic) concert staged in one of the local churches and a popular Bands Night, keep the experience fresh and appealing.
The festival will bring together a range of talented visiting and local musicians from Ireland, Scotland and the Isle of Man. Many of these young people have been involved in the local scene from an early age, showing a natural aptitude for traditional music.
There’s an almost even split between visiting musicians from Ireland and Scotland, with ‘Cairde’ bringing together three young people from Ireland weighted down with accolades, trophies and a whole range of musical instruments. This includes Michael Kerr who has toured both the US and Germany several times with the Savannah Philharmonic Choir, a number of Irish dance shows and the Irish Harp Orchestra. 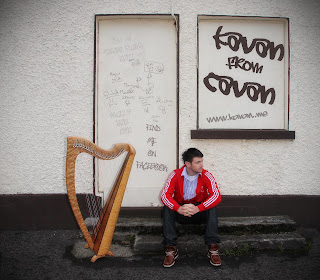 Meanwhile Kavan Donohue who hails from County Cavan is a confident nineteen-year-old with a whole string of festival successes across the UK, Ireland, Europe and the US and performances on both television and radio. Known to many as ‘Kavan from Cavan’, critics view him as a force to be reckoned with on the traditional music scene. For ‘Shennaghys Jiu’ he will be joined by Cian Ó Ceallaigh and Richard Pyne playing bodhran, banjo and mandolin.
But mighty new trio ‘Baarool’ has a foot firmly in both the Manx and Welsh camps with musicians embracing links with both countries and developing long-held connections within the fabric of their music. It’s an all-male line-up consisting of gifted musicians Jamie Smith, Tom Callister and Adam Rhodes
However, a number of other young, local musicians will feature during the festival, of which many gather in the north of the Island where there is a healthy and buoyant interest in Manx music, song and dance.
‘Shennaghys Jiu’ will also see the launch of a new and exciting children’s book ‘Finlo and the Fairy Kings’ by Ruth Blindell, a fictional account of a Manx adventure at the magical Dhoon Glen.
www.shennaghys.org
Valerie Caine © March 2012 (Courtesy of Manx Tails)