I missed the death of our most famous Manx man of letters as I was on vacation. Here is the obituary from the Daily Telegraph. If you’re not high-brow enough for the whole thing just know he was born in the Isle of Man and was obviously a bit impractical (check out the story at the end about mistaking the trashmen for movers.) 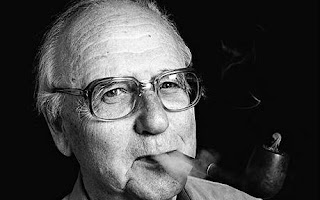 Sir Frank Kermode, who died on August 17 aged 90, was the most eminent critic of English literature since FR Leavis; his teaching career culminated in the senior English professorship at Cambridge University, a post he surrendered in 1982 in the aftermath of a widely reported doctrinal rift within the faculty.

Like the “Two Cultures” spat between Leavis and CP Snow in the 1960s (which Kermode had helped initiate by acclaiming Snow as a novelist in the “great tradition” approved by Leavis), the later row also concerned the correct approach to education in the modern age.
Though at the time he was seen as a supporter of progressive theories, Kermode’s attitude ultimately became one of alarm at the widening gulf between academic ideas about literature and the experience of books had by the ordinary reader. Kermode had always tried to act as a bridge between these two worlds, particularly by writing for newspapers. In doing so he (perhaps unwittingly) embodied the transformation of the popularising academic from man of letters to media don.
Kermode had initially been a scholar of the Renaissance, notably of Shakespeare, Spenser and Donne, but he came to the attention of fellow academics with Romantic Image (1957), a study of the use of imagery in poetry by romantic and modern writers.
He continued thereafter to combine Renaissance and modern studies, but in both his preoccupations remained broadly the same – the relationship between art and order, and that between writers and the changing world of which they had tried to form a coherent vision. He also came to be keenly interested in the obverse of this latter theme, namely whether the changing sensibilities of the world renders the vision of some past writers redundant.
As well as noteworthy studies of Milton (1960) and the American poet Wallace Stevens (also 1960) – a particular influence on Kermode’s sometimes oblique style – his most important criticism included The Classic (1975), which explored the response of modern writers to a secularised world; The Genesis of Secrecy (1979), which examined the nature of narrative; and The Sense of an Ending (1967).
This last was a brilliant investigation of the idea that the longing for an ending brings order to both life and literature, giving shape to the endless flux of time. Kermode, who was also a considerable cultural historian, used apocalyptic fiction as his model, and showed none of the lack of stamina in argument that sometimes undermined his broadest criticism.
The Sense of an Ending gave notice of Kermode’s increasing tolerance of modern literary criticism and of its interest less in the content of a work than in its form and structure. From 1967 to 1974 he taught at University College, London, a period that witnessed the birth of new literary theories, notably structuralism and deconstruction. These held that readers should no longer study a text with a view to discerning an objective meaning, since in the modern world texts might have an infinite number of equally valid meanings, each of equal cultural weight, each peculiar to the reader.
Although Kermode was later capable of castigating the gibberish written by many proponents of these ideas, he was always open-minded, and in the late 1960s was an important supporter of the further investigation of these new theories. In a celebrated coup, he arranged for the structuralist Roland Barthes to lecture at UCL.
Such contemporaneity of attitude soon brought Kermode, who consistently disclaimed such ambitions, a clutch of public appointments. Already a stalwart of higher journalism as a reviewer for the New Statesman and The Guardian, in 1967 he took part in that most Sixties of events: giving evidence that a book (in this case Last Exit to Brooklyn) was not obscene. By the early 1970s he had judged the first Booker Prize, was on the Arts Council, had run an Arts Lab at the South Bank and was editing a series of guides to Masters of Modern Thought. His career moved a wryly jealous Philip Larkin to doggerel:

If I could talk, I’d be a worthless prof
Every other year off
Just a jetset egghead, TLS toff
Not old toad: Frank Kermode