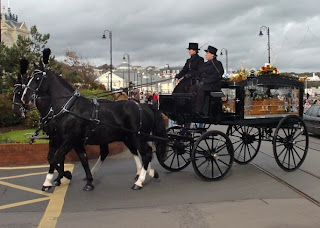 From IOMToday.
HUNDREDS turned up to wave goodbye to comedy legend Sir Norman Wisdom today as the Isle of Man’s most famous resident was given a public funeral.
They lined the pavements along Douglas seafront as the funeral cortege made its way to church, with well-wishers breaking out in applause as the horse-drawn hearse carrying the popular star of films such as Trouble in Store passed by.
Sir Norman died at the age of 95 on October 4 at Abbotswood nursing home, Ballasalla, where he had spent the last three years of his life.
Stars who travelled for today’s service in St George’s Church included Todd Carty, of the Bill and EastEnders, comedian and former Coronation Street star Bradley Walsh, comic Stan Boardman and TV mogul Michael Grade.
The funeral cortege travelled along the promenades, before heading to St George’s Church, where a service was led by Archdeacon Brian Smith.
Scottish singer Moira Anderson, an island resident, sang Who Can I Turn To and Absent, while Sir Norman’s son Nick paid a personal tribute to the ‘family man’.
He said: ‘He would always make time for people, whatever the situation, which was time he didn’t necessarily have because he was usually running late!
‘He was a very caring and loving father.’
Sir Norman’s grandson Lawrence, read out a poem entitled Gratitude, written by the funnyman 15 years ago.
His agent Johnny Mans also paid a tribute to Sir Norman, the actor.
Hymns included Praise My Soul, The King of Love My Shepherd Is and Guide Me O Thou Great Redeemer.
A retiring collection was taken for Sir Norman’s Isle of Man charity Wooden Spoon.
A private service takes place in the north of the island tomorrow (Saturday).

Sir Norman’s daughter-in-law Kim said: ‘We have given the public what they wanted, which is a very public funeral. We are hoping that everyone will respect our privacy the following day as this will be when the family will say our final farewells.’