Currently they’re fueling but they have found a hydrogen leak, It’s the same one that canceled two launches last year. Oh, and the winds are high so they may cause a scrub. I’ve now spent nearly two weeks of my life in the hope of seeing a launch so I am used to having my hopes crushed but I’m not hopeful. So instead of being all bitter and twisted I’ll share this nice photo of Roman, Chris and Nicole’s son landing the Shuttle. Just heard it was scrubbed again. And now we have to go home. Boo hoo. 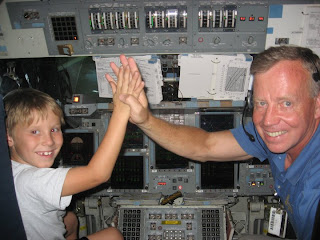