Kelly McCarthy Posted on November 14, 2011 Posted in Uncategorized
Local music duo ‘Shoh Slaynt!’ recently released their first CD  under the title of ‘Snuff the Wind’ which incorporates their love of Irish traditional music and a selection of original compositions. 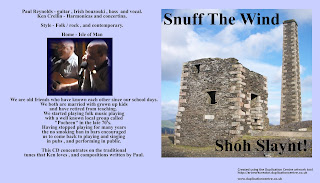 Featuring Paul Reynolds on guitar and vocals, with Ken Crellin playing a range of harmonicas and an Anglo Concertina, some readers may remember them as one half of Island based band ‘Pocheen’.
Now retired and with more time to follow their passion for music, ‘Shoh Slaynt!’ has combined a number of ideas and influences for their first album. Styling themselves as a contemporary folk/folk rock duo, Paul and Ken’s material reflects events in their own lives, conveying a relaxed style and an easy-going manner.
The album’s title, ‘Snuff the Wind’, is a colloquial name for a lead mine worked in the nineteenth century. Officially known as ‘Cross Vein Mine’ or ‘Cronk Vane Mine’, it’s located in the Glen Rushen area in the west of the Island. A superb photo of what remains of the mine’s buildings is depicted on the front cover, with the first track dedicated to the redundant building with its ghosts and memories.
Available from the Lexicon Bookshop, Manx Museum, Celtic Gold and Peter Norris Music priced at £11, further details about ‘Shoh Slaynt!’ (Manx Gaelic for Here’s Health!) can be found on their Facebook page.
Valerie Caine © October 2011  (Courtesy of Manx Tails)