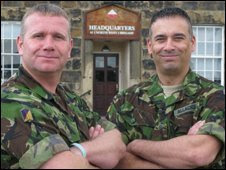 BBC Two Lancashire-based soldiers are preparing to trek 100 miles round the Isle of Man in four days to raise money for their injured comrades.

Warrant Officer Nik Smith and Warrant Officer Peter Alladice, both 39, from the Royal Logistic Corps in Preston will begin and end the trek in Douglas. Armed with only with soldiers’ rations and camping equipment, they are fundraising for Help the Heroes. Their trek starts on 5 August and they hope to collect money on the way round.