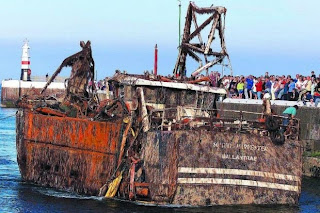 The BBC has an item here about the Solway Harvester a Kirkcudbright (Scotland) scallop dredger that sank off the Isle of Man on 11 January 2000 in heavy seas with the loss of all its crew. The vessel is still in the Isle of Man. The Manx Government, under Chief Minister Donald Gelling, paid to have the vessel salvaged and the bodies recovered when the Scottish and English governments wouldn’t. There will be memorial services today. 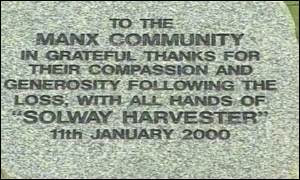 A memorial stone marking the loss of the Solway Harvester fishing boat is being sent from Galloway to the Isle of Man.
The carved granite memorial is a gift from the villages of the seven crewmen who died when the Kirkcudbright-based vessel sank in mountainous seas on 11 January.
It has been created from a granite bollard which was used to tie up boats at Isle of Whithorn harbour.
The memorial is to express thanks after the Isle of Man authorities agreed to pay for the salvage of the vessel and the recovery of the men’s bodies.