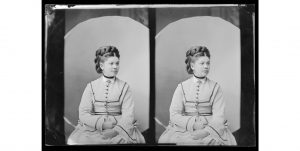 Manx National Heritage is pleased to announce the opening of its latest exhibition ‘Sophia Morrison – The First Curator’, at the Manx Museum on Saturday 10 December 2016.

‘Sophia Morrison – The First Curator’ is being staged to commemorate the 100th anniversary of Sophia’s death and celebrates both her work and her tremendous contribution to Manx culture. She is best known as the author of ‘Manx Fairy Tales’ and was a leading member of the Manx cultural revival.

Over a hundred years, many people would have known Sophia Morrison as the daughter of the local grocer in Peel and possibly as a hard-working member of various Manx societies and groups. But Sophia Morrison was much more than that. She cared passionately about what it meant to be Manx and helped record and identify all the different features that made up Manx culture. She was a Manx patriot and cultural nationalist, a leading player in the Celtic Revival throughout the Celtic world, not just on the Isle of Man.

Sophia Morrison was also an avid collector and recorder of all things Manx, whether that was the Island’s language, its folklore, tales or music. She was also a dedicated speaker and campaigner for the Manx language as well as an enthusiastic author and publisher of various Manx publications. She was also a good friend and mentor to many people and helped support and encourage others to become as passionate as herself in recording, preserving and promoting Manx culture in its many forms.

Following her death in January 1917, many people felt that a ‘light’ had truly gone out and that the Manx Cultural Revival had lost one of its greatest supporters and champions. Others felt that the greatest tribute that could be paid to Sophia Morrison was for everyone to continue her work and maintain her legacy into the future.  As a result, Sophia Morrison’s work did not end in 1917 and many of her successes continue to grow in significance and importance through to today.

Yn Cheshaght Ghailckagh (The Manx Language Society), of which she was a founder member, continues to flourish and many Manx speakers still learn Manx using her cousin’s First Lessons in Manx. The Manx language is now taught in all the Island’s schools and a generation of children have been taught through the medium of Manx at the Bunscoill Ghaelgagh in St Johns.

Sophia Morrison’s most important legacy was possibly one that even Morrison herself did not recognise at the time – her young prodigy Mona Douglas. Mona Douglas would spend her life bringing the Island’s culture to new audiences and inspiring successive generations to make it a truly living and vibrant culture.

Sophia Morrison’s legacy lives on in all those inspired by the organisations she helped form and the work that she wrote. Most importantly, her legacy continues to inspire us all today.

“The more that I have looked at the life and work of Sophia Morrison and the various aspects of Manx cultural life that she championed and campaigned for, the more fascinated and amazed I have become. For an individual who was so naturally shy, Sophia Morrison was a truly inspiring individual who made things happen through years of hard work and dedication and a passion for all things Manx.

Discover more about her efforts, her passion and what made Sophia Morrison a major force of the Manx cultural revival at ‘Sophia Morrison – The First Curator’.

The exhibition is on display at the Manx Museum, Douglas, until 6 May 2017 and will be accompanied by various events over the forthcoming months. Admission is free.