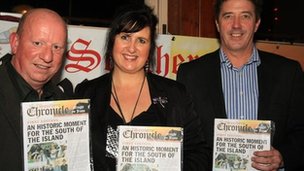 The newspaper will be a bi-monthly publication
The first newspaper to be launched in the Isle of Man for more than 24 years has gone on sale in the south of the island.
The Southern Chronicle, described as a “true community newspaper”, went on sale on Wednesday.
The 40-page publication is in an A4 format and sells for £1.
Co-founder and editor Bill Dale was also the founding editor of the past two newspapers to be launched in the island.
He was editor and co-owner of the Isle of Man Gazette, launched in 1985, and founding managing editor of the Manx Independent which first went on sale in 1987.
“The feedback we have had has been really positive,” said co-founder Ricky Broadbent.
“We are very happy with the first edition and already have the second planned for before Christmas.
“We really hope the paper will highlight the amazing things going on in the south.”