St Bridget – A Woman for Our Time

With the rise in feminism and raised awareness of the environment dominating the headlines, advocates may look towards an inspirational leader to guide them through their campaigns, but historically St Bridget, who has links with the Isle of Man, may well tick all the boxes.

Believed to have been born near Dundalk, County Louth, in the mid fifth century, St Bridget (Brigid (Irish) Breeshey (Manx)) is a much celebrated figure in Ireland, typically remembered for establishing an abbey and church in Kildare on a site now occupied by St Brigid’s Cathedral. However, confusion arises with similarities to a goddess of the same name and many believe she is a merging of two people, sitting on the boundary of pagan mythology, Druidism and Christian spirituality.

St Bridget, whose feast day is celebrated on the 1st February, is said to have held a unique position in the Irish church and society of her time, and as Abbess presided over the local Church of Kildare and was leader of a double monastery for both men and women. 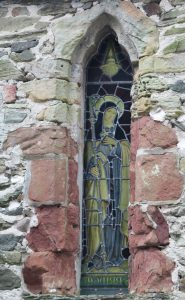 Stories and legends abound about St Bridget, but what emerges is a portrait of a strong and gentle woman, a powerful leader, good organiser, skilful healer and a wise spiritual guide, who presents what is termed the feminine face of God. Often depicted as a peacemaker, this has been immortalised in the St Bridget’s Cross, a token of goodwill between neighbours after a local quarrel. A version of this may also be found on the Isle of Man.

The timing of her feast day sits perfectly with the celebration of spring, new life and St Bridget’s natural attunement of the seasons and cycle of nature. She was often referred to as the Saint of Agriculture. She has been designated a patron of many things, from chicken farmers and fugitives to printing presses and sailors, but the list also includes babies, children whose parents are unmarried, dairy-maids, infants, midwives, milk-maids and nuns. 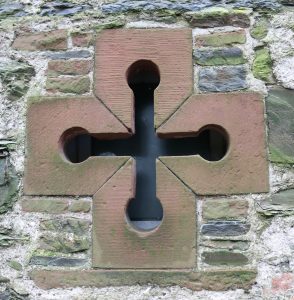 Although time blurs the edges of historical record, it’s widely reported that St Bridget visited the Isle of Man as a young girl to receive the veil from St Maughold, although other sources place this ceremony elsewhere. At this point she is said to have founded the Nunnery, near Douglas, ultimately dissolved during the sixteenth century, but historians have been frustrated by lack of reference and a long term dependency on traditionary evidence.

However, there’s no doubting that she was a popular saint on the Isle of Man. You’ll find her name on both a northern parish and its church and seven ancient keeill (chapel) sites, as well as the aforementioned nunnery. Her effigy is also said to be represented on the ancient cross close to the churchyard at Kirk Maughold and on the armorial bearings of the Manx diocese. St Bridget’s Chapel, probably dating from the twelfth or thirteenth century, on the Nunnery estate survived, becoming stables before re-established as a place of worship from the late nineteenth century until 1998, when it was deconsecrated. 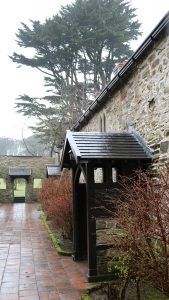 Meanwhile an old custom practised on the eve of St Bridget’s Day on the Isle of Man involved gathering a bundle of green rushes, standing with them on the threshold of the house and inviting the saint to visit; ensuring peace and plenty for the coming year. Some might also sweep out the barn before placing a bed, chair and table with bread and cheese, a lighted candle and a quart jug of good Manx ale in expectation of the desired visitor.