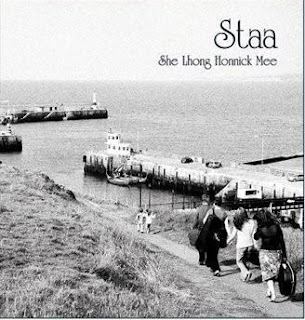 ‘She Lhong Honnick Mee’ is a long awaited and much welcomed CD release by Peel based folk group ‘Staa’. Well known on the local traditional music scene for their distinctive portrayal of Manx tunes and songs as a family group, the title of the CD takes its name from the first song on the recording, which tells the story of how the sea separates two lovers.

Led by talented guitarist and vocalist Greg Joughin ‘Staa’ has been entertaining audiences for twenty years, but remarkably this is their first CD release. It may have been a long time in gestation (two years), but well worth the wait.

All of the material on this initial CD was sourced from the infinitely resourceful ‘Kiaull yn Theay’ music books, gathered by the late Colin Jerry, another well respected musician who lived many years in Peel.

A relatively gentle recording incorporating viola, fiddle, guitar, harp and assorted vocals, the eye catching glossy insert reproduces the words of the songs in Manx Gaelic and is easily identifiable by its distinctive black and white images of Peel. This is an uplifting collection of music, despite stories of hardship at sea and tragic loss, and is unlikely to disappoint those who have already experienced ‘Staa’ at a live session.

Copies of the CD are available from Manx National Heritage by contacting enquiries@manxheritageshop.com
Valerie Caine © March 2010