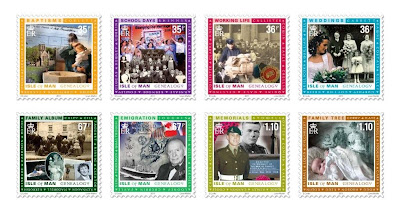 With the iMuseum now a step closer to opening its doors to a curious public Isle of Man Post will be issuing a set of stamps on the 18th February, 2011, dedicated to the all absorbing and fascinating topic of genealogy. A series of eight stamps charts the milestones of life through the use of public records held in the iMuseum, reflecting a selection of events between birth and death.

Isle of Man Post has worked closely with the Isle of Man Family History Society and Manx National Heritage to research key themes relevant to tracing long forgotten family history, and also features the most common surnames found on the Isle of Man Census of 1891 and the valuable work undertaken by these institutions.

The main themes running through this collection are baptisms, school days, working life, weddings, family album, emigration, memorials and family trees. Additional information included with the pack reveals useful starting points for the novice genealogist and how modern technology has enhanced the availability of important documentation.

Stalwarts of Manx genealogy, the Isle of Man Family History Society, has joined forces with Manx National Heritage to provide valuable records of monumental inscriptions taken from the Island’s churchyards which are now available in a digital format. Equally important is the recording of Island based War Memorials by Roger Christian with the backing of the Isle of Man Government’s ‘Preservation of War Memorials Committee’.

A mint set of eight stamps is available together with a presentation pack and a First Day Cover.