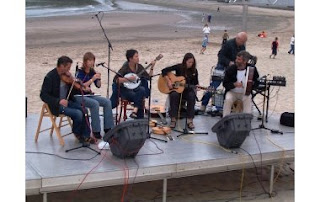 Musicians at the Cooish, an annual celebration of the Manx language.
(Photo courtesy Ynsee Gaelg.)

Laa mie erriu. The other day I introduced a few basic greetings in Manx. Before going further, I’d like to step back and offer some background on the language.

The Manx language, declared dead by some in the 1970s, is showing significant signs of life in the new millennium. More people are learning and speaking Manx.

Manx is taught as a voluntary subject in the Isle of Man’s schools, and the government has increased support for the language. The 2001 Isle of Man Census showed a total of 1,689 persons who could speak, read or write Manx — the largest number in almost a century.

That may seem a very small number, but bear in mind that the total population of the island is less than 80,000, and that the number of Manx speakers reported in the 1961 census was 165.

In the past 40 years, Manx has made a remarkable recovery. Dr. Brian Stowell, former Manx Language Officer and a leading Manx teacher, calls it “a complete transformation.”

It’s the result of broad economic and social change over the past two generations, as banking and a variety of new industries took root and immigration swelled the Manx population.

The Manx government today sees the island’s unique language and identity as an advantage in the international marketplace. And many immigrants are drawn to Manx culture as well.

It’s a very old culture — the ancestor of the language we now call Manx was introduced to the island around 500 A.D. Manx is a Celtic language very closely related to Irish and Scottish Gaelic — that’s clear from its native name, Gaelg — and more distantly to Welsh, Cornish and Breton.

It remained the main language of the island despite successive conquests by the Scandinavian Vikings, the Scots and, in the 14th Century, the English.

In 1764, a pamphlet published by the Society for Promoting Christian Knowledge reported “the population of the Isle is 20,000, of whom the far greater number are ignorant of English.”

Unlike Irish and Scottish Gaelic, Manx was not a written language until the 18th Century. The first Manx book, a religious text, was published in 1707.

The language fell into serious decline in the 19th Century, as the long-isolated island was absorbed into the growing English-speaking economy of Great Britain.

The first serious attempts to revive it came late in the 19th Century, with the founding of Yn Cheshaght Ghailckagh — The Manx Language Association — a group still active today.

The last member of the old generation raised speaking Manx, Ned Maddrell, died in 1974, and some authorities declared the language dead with him. But Manx learners refused to give up its ghost. They continued speaking it, and the number of learners began to grow.

A new attitude toward Manx began to grow, too. The old prejudice against the language — rooted in the 19th Century expansion of English at the expense of the Celtic languages — was giving way to a new interest in Manx.

Today there is a growing Manx-language primary school on the island, Bunschoill Ghailckagh, and Manx is a much more visible and appreciated part of the island’s heritage.

That would have surprised, and no doubt pleased, the 165 Manx speakers of 1961.

Tomorrow I’ll be back with more conversational Manx and fresh links to new Web sites.