Statue of Miner Unveiled in Laxey

Valerie Caine Posted on May 24, 2015 Posted in Uncategorized 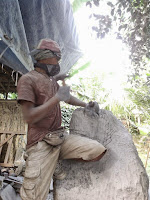 A new statue, depicting a Laxey miner, was unveiled this weekend to honour those who worked in the village mines, in a ceremony
y which also celebrated the completion of Laxey’s regeneration scheme.

The statue is the work of stone artist Ongky Wijana, who lives on the island of Bali with his Manx born wife, Hannah, and their two children, Lola and Marlow.
This magnificent piece of work was carved from Carlow Blue limestone, sourced from Southern Ireland, which was shipped to the Isle of Man before heading out to Bali, when problems arose with Ongky’s work permit and visa.

Meanwhile, he prepared for the project by researching the lives of miners in Laxey, as well as those in the UK, so that he could get a feel for what life was really like for them and how their gruelling work affected their appearance.

Ongky remarked, “These guys were tough but often looked weather-beaten, sunken-cheeked and worn out. However, they also had a solidity to them and always a determination in their eyes that I wanted to capture. I also wanted to make sure their clothes and tools were as accurate as possible.”
The work was funded by Laxey resident and benefactor Phillis Tate, who died in 2012 aged 97. A trustee of her estate, Ivor Hankinson, co-ordinated the project and said, “Mrs Tate took a great interest in the village and its heritage (a donation from her estate part funded the recently opened extension to the Laxey Working Men’s Institute) so she was saddened when the wooden statue of a miner, which this one in stone is to replace, fell into disrepair and had to be removed in 2008.”

It will sit on a granite plinth with four Welsh slate panels, also carved by Ongky, depicting the arduous conditions the miners endured, which, in combination, will stand four metres (13 feet) high. It’s enclosed in Manx stone, the work of local stone masons Tony Bridson and Howard Kneale, and is set to become a symbol of Laxey’s regeneration project, which includes the refurbishment of Laxey Tram Station, the adjacent Rose Gardens and the creation of a new village square that will connect the centre of the village to the Heritage Garden and a new coach park.
Ongky, who was also commissioned in 2010 to create another statue of a miner in Peel sandstone for the Working Men’s Institute, commented, ” When the enormous block of stone arrived it seemed like an impossible task was ahead of me. This was definitely the hardest stone I’ve ever carved, but I worked out the best way to deal with it as I went along and the shape soon started to emerge from the block. It was tough work and has taken in total about ten months, but I’m extremely proud of what I’ve been able to create.”
Completed at the close of 2014, the statue arrived on the Isle of Man at the beginning of April.

A commemorative plaque, honouring the thirty five miners who lost their lives in the Laxey Mine 1831 – 1912, was also unveiled by the Lieutenant Governor, Mr Adam Wood, where he was joined by Anne Bennett, the great-grand daughter of Captain John Kewley who led the rescue efforts during the Snaefell Mine disaster in 1897, when thirty two miners lost their lives.
Seen as a community event, members of Ellan Vannin Pipes and Drums led the parade from the new village square, together with pupils of Laxey School dressed in costume from the mining era.
Valerie Caine