Stop the clocks. George Daniels has passed away. 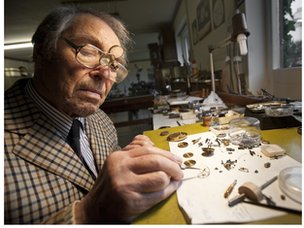 Tribute has been paid to Isle of Man watchmaker Dr George Daniels as the “greatest horologist of all time”, following his death.

Roger Smith, who was inspired by Dr Daniels to become a watchmaker, said the 85-year-old was responsible for some of the most important advancements in his field.


He died peacefully at home on Friday.

Dr Daniels’ greatest contribution in his 60-year career was the coaxial escapement, a modern watch mechanism which won global acclaim.
Mr Smith said he was inspired to take up watch-making following a lecture by Dr Daniels more than 20 years ago and followed him to the Isle of Man to work.
“His philosophy was that of the artist craftsman creating individually hand-crafted pocket and wristwatches to a standard which had not been seen in English or indeed any watch-making for about 150 years,” said Mr Smith.
‘Extraordinary beauty’
“George’s talents were enormous. He covered all spectrums of horology through his books, public speaking and of course his work.”
Dr Daniels created 37 watches over a 60-year career. Each watch was created from scratch by hand and from raw materials, a task which includes mastering more than 30 separate skills and could take more than 2,500 man hours to complete.