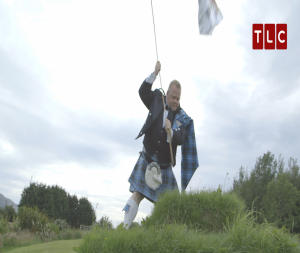 This is the spiel from TLC on its latest reality show which follows David Drew Howe as he attempts to claim royalty status over the citizens of the Isle of Man.

When blue collar, All-American auto repair advisor David Drew Howe decided to research his ancestry online, he never imagined that the shocking results would catapult him and his family into the most elite social circles overnight, in one word – royalty.

Suddenly Royal follows David, his wife Pam, and 12-year-old daughter Grace on an adventure of a lifetime as they make the bold decision to travel 3,000 miles away to unveil what it really means to be heir to the throne of the British Isle of Man. TLC has ordered seven one-hour episodes.
For the Howes, having noble lineage and even getting an invite to the Duke and Duchess’s royal wedding is one thing, but convincing the locals they are the royal family will prove to be another story as the Isle’s residents won’t take kindly to an American trying to claim the throne. As David faces the trials and tribulations of winning over the people of Mann, Pam and Grace embrace the adventure, but must also adjust to living there – a far cry from the world in which they’re familiar.
After arriving on the Isle of Man, David, Pam and Grace begin to explore the land, get acquainted with the traditions, learn the local Manx language, and even hire an etiquette coach and royal advisor. From attempting to host royal garden parties and sipping tea with the highest social circles of the Isle, to participating in the World Tin Bath Championship and getting lost during an RV tour, this fish out of water experience proves to be challenging, comical, and often times emotional. After discovering that being royal is a lot harder than it seems, will the Howes’ dedication be rewarded and result in them becoming the ruling family of Mann?

The show premiers on TLC on Wednesday September 9th and 10/9C.
#SuddenlyRoyal for Twitter users.