p Sunnerbogillet recently completed an exchange visit as guests of their long-term friends in the Manx Folk Dance Society, with time in their schedule for joint displays at the Quarter Deck in Port Erin and Laxey Square.

Members of the Manx Folk Dance Society travelled to Ljungby in southern Sweden during 2015, where they visited the Europeade Folk Dance Festival in the town of Helsingborg, on the Baltic coast. 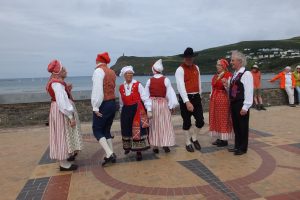 Sunnerbogillet was established in 1959, with a view to studying and promoting Swedish folklore through dance, music, costume, handicrafts and tradition. Distinguished by their colourful costumes, which represent those worn in the nineteenth century homesteads of individual dancers, Sunnerbogillet’s repertoire includes a selection of early, international folk dances and they regularly organise exchange visits with dance groups in other countries.

Sunnerbogillet managed a little sight-seeing, including a visit to Snaefell, a trip on the steam railway, a tour of one of the local breweries and some free time at the Royal Manx Agricultural Show.