Kelly McCarthy Posted on November 23, 2011 Posted in Uncategorized
With Americans in uniform serving all over the world today, the idea of them celebrating Thanksgiving abroad does not strike anyone as unusual. With Americans locked in a world war in 1942, it certainly was.
The hundreds of thousands of U.S. troops fighting the Axis powers in North Africa, the South Pacific and Europe celebrated the first global Thanksgiving as best they could, in the steel bulkheads of a warship’s mess or the canvas of a jungle tent. England—teeming with American soldiers and sailors and airmen, ready to defend our ally against a possible German invasion and beginning preparations for an assault on Nazi-conquered Europe—was another matter.
In those dark days, Americans took special pleasure in displaying their homegrown holiday to the Mother Country. The English were dubious at first but slowly realized they were being invited to share in something very special.
Helping to win them over was an extraordinary act of generosity very much in keeping with the spirit of the holiday. Merchant ships had carried tons of frozen turkey across the submarine-infested Atlantic for the big day. Then the Yanks announced they would donate all of it to the thousands of British war wounded in hospitals. Instead they would dine on roast pork and eat plum pudding for desert, alas without the standard rum sauce. “The quartermaster failed to deliver the rum,” a newsman reported.
Americans also took advantage of their holiday abroad to walk in the footsteps of the Pilgrims who created the first Thanksgiving in the New England wilderness in 1621. One officer sat in the pew once occupied by the legendary Miles Standish, the Pilgrim’s military leader, in the small parish church at Chorley, in the county of Lancashire. The Chorley town hall flew an American flag on Thanksgiving Day—the first time in their long history that the citizens had ever honored the flag of another nation.
Enlarge Image 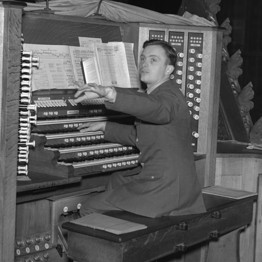 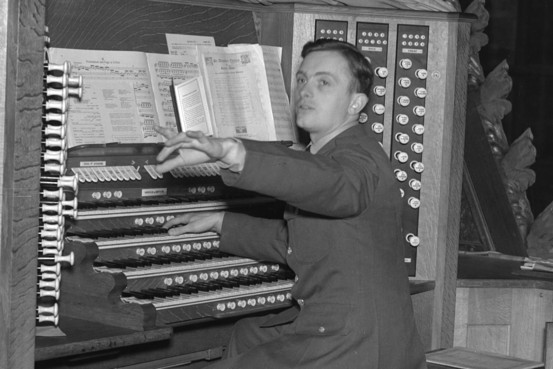 U.S. Army Cpl. Heinz Arnold warms up the pipes in London’s Westminster Abbey.
The Lord Mayor of Boston, in Lincolnshire, invited 100 American servicemen to be his guests for a modest wartime dinner. Afterward, a senior officer laid a wreath on a memorial to five pre-Revolutionary War royal governors who had been born in the historic city. An American private laid another wreath in the cold dark cells where some Pilgrims were confined in 1607 while trying to escape to religious freedom in Holland.
Even more thrilling to those with a sense of history was a visit to Southhampton, where a U.S. Army detachment stood at attention before the pier where the old freighter, Mayflower, was fitted out for her trans-Atlantic voyage. At Plymouth they visited the quay from which the Pilgrims boarded. Not far away, the Archbishop of Canterbury conducted a service in the ruins of St. Andrew’s Church, where some of the Mayflower’s passengers prayed before they began their 3,000-mile voyage. Virginia-born Lady Astor was on hand for these ceremonies, calling Americans “my compatriots” and joking with a Southerner from Georgia, Private Billy Harrison, about their superiority to “damn Yankees” from New York.
The most dramatic ceremony was in London’s Westminster Abbey, where English kings and queens have been crowned for centuries. No British government had ever permitted any ritual on its altar except the prescribed devotions of the Church of England. But on Nov. 26, 1942, they made an exception for their American cousins.
No orders were issued to guarantee a large audience. There was only a brief announcement in the newspapers. But when the Abbey’s doors opened, 3,000 uniformed men and women poured down the aisles. In 10 minutes there was not a single empty seat and crowds were standing in the side aisles. One reporter said there was a veritable “hedge of khaki” around the tomb of Britain’s unknown soldier of World War I.
Cpl. Heinz Arnold of Patchogue, N.Y., played “Onward Christian Soldiers” on the mighty coronation organ. With stately strides, Sgt. Francis Bohannan of Philadelphia advanced up the center aisle carrying a huge American flag. Behind him came three chaplains, the dean of the Abbey, and a Who’s Who of top American admirals, generals and diplomats. On the high altar, other soldiers draped an even larger American flag.
Their faces “plainly reflected what lay in their heart,” one reporter noted, as the visitors sang “America the Beautiful” and “Lead On O King Eternal.” The U.S. ambassador to Britain, John G. Winant, read a brief message from President Franklin D. Roosevelt: “It is a good thing to give thanks unto the Lord. Across the uncertain ways of space and time our hearts echo those words.” The Dean of Westminster and one of the Abbey’s chaplains also spoke. “God has dealt mercifully and bountifully with us,” the chaplain said. “True, we have had our difficulties . . . but all of these trials have made us stronger to do the great tasks which have fallen to us.”
Throughout Britain, the first global Thanksgiving gave men and women from the New World and the Old World a much-needed feeling of spiritual solidarity. Let us hope that today’s overseas service men and women can have a similar impact on a troubled and divided world. Happy Thanksgiving—and our nation’s sincerest thanks— to them all, wherever they may be deployed.
Mr. Fleming is a former president of the Society of American Historians. This article was adapted from his ebook, “An American Feast: Six Memorable Thanksgivings,” just out from New Word City.