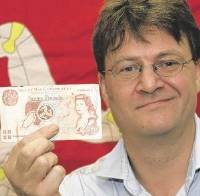 BUSINESSMAN Tom Winnifrith has generated massive coverage for Isle of Man Bank notes on a live TV appearance. Tom appeared on the international CNBC network to express his views about gold and the US dollar.

As part of his commentary Tom displayed a £20 Manx bank note asking the woman presenter: ‘What is it worth?’ – a question she refused to answer.

Tom argued that the US dollar is set to crash as the ‘US is the world’s poorest country’ and that ‘the US is practically owned by China’.

Such was the impact of Tom’s appearance that his comments have been reported across the globe in the US and Russia and in countries such as Lithuania, Poland, Macedonia and even Mongolia.

Tom, 42, is the Chief Executive Officer of Rivington Street Holdings and works from the Athol Street, Douglas, head office.

He told Business Examiner he was invited onto the CNBC business show Squawk Box to discuss the gold price following a stunning first year for his SF t1ps Smaller Companies Gold Fund for which he is Fund Manager.

The fund is now ranked as the fourth best performing unit trust across all sectors in the British Isles with a stunning 52 per cent return since its launch on September 11, 2009. More at IOMToday.