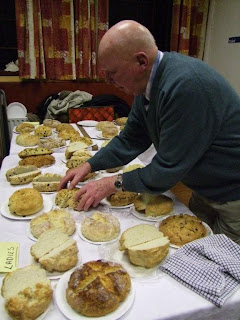 An appreciative audience sat down in St James’ Church Hall to hear farmer John Kennaugh compére one of the most important events in the Dalby calendar.

The Annual World Bonnag Championships attracts people from far and wide to this small church situated on a remote stretch of western coastline, where former baker Bert Winckle of Foxdale has the unenviable task of choosing the winners of this unique competition.

Bonnag, a  non yeasted, simple bread, shared by the rural community for generations is a cousin of the Irish soda bread. Recognised as an essential part of the Manx kitchen it is made quickly and efficiently by hand using few ingredients, but never without the vital buttermilk, once available on every Manx farm.

John Kennaugh took his audience on a nostalgic trip down memory lane as Bert Winckle set to work, slicing, sampling and smelling the competition entries as the table groaned with the weight of bonnags.

However, a shepherd’s pie supper provided by the organisers took everyone’s mind off the job in hand, followed later by a selection of home-made cakes.

An eager audience enjoyed an assortment of local entertainment beginning with ‘Strengyn’, a competent duo from the Manx traditional music scene who played a mixture of their own compositions and Manx traditional music on a variety of stringed instruments. This was followed by Manx singer Fiona Cain and local poetess Zoë Cannell, and an impromptu performance of ‘The Peel Lifeboat’ written by T. E. Brown and recited by John Kennaugh.

The evening was also an opportunity to hand over fundraising cheques to Namaste Children’s House and the Special Needs Unit at Peel Clothworkers, and to introduce new beneficiaries for 2010; Send A Cow and the RNLI.

In the meantime Bert Winckle had sifted through a mountain of bonnags and made his final decision. The winners were:- Ben Awkal (Children) Alex Beavis (Men) and Fiona Cain (Women) who also took home the ‘Isle of Man Creameries Buttermilk Cup’ as the overall winner.

Then it was time to auction all of the bonnags provided for the competition, a gargantuan task, and sing the Manx National Anthem before heading out into the night.