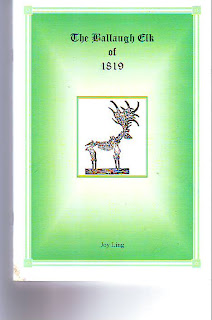 When she was a little girl Joy Ling (nee Craine) listened intently whilst her father spoke of how her great, great, great grandfather, Thomas Kewish, discovered an important artifact in the village of Ballaugh, which led to both local and worldwide interest. But it was only later in life that Joy’s curiosity in the story increased, and she began to research the fascinating story of what became known as ‘The Ballaugh Elk.’

It was in 1819 that Thomas Kewish, the village blacksmith, and James Taubman, a brewer in Ballaugh, discovered the skeleton of an extinct great deer in a field in Ballaugh. This was many years before the discovery of the specimen now in the Manx Museum. Known at that time as an Irish elk, its discovery created huge debate on the Island with the fourth Duke of Atholl claiming the magnificent skeleton belonged to him. Kewish smuggled the great deer to Whitehaven in England in order to escape the Duke of Atholl’s men. The Duke eventually got his own way and made a gift of it to Edinburgh University Museum, paying £70 for the skeleton and £10 to Kewish, who obligingly removed the skeleton to Edinburgh.

It was the first virtually perfect skeleton of this species to be discovered in the world, with Kewish proudly exhibiting his find in Ballaugh, Douglas and Whitehaven.

There has been a considerable amount of scientific research on the species, including a recent carbon dating on ‘The Ballaugh Elk.’ Joy’s fascination led her to further research, with a desire to find out more about the people and the circumstances involved in this unusual story. Joy remarked, “It was a bit of local history, with some scientific significance. As well as filling in some family history details, it seemed important to record what material was available before it was forgotten.”

Her research also reflects some of the social history of the Island, dwelling on the difficult times experienced by farmers during this period, when charging the public to see the skeleton brought valuable income. But Joy’s enquiries also exposed the greed of the Duke of Atholl, pressing for extortionate taxes from the Manx people, and claiming he had a right to what was both on the land and under it.

Her extensive investigations took her to the Atholl Papers and other publications in the Manx Museum, the university libraries of Edinburgh, St. Andrew’s and Cambridge, the National Library of Australia and the Smithsonian Institute in Washington.  Despite meeting with the Director of Natural History at the National Museum of Scotland, Joy was disappointed not to be able to see the elk herself, as the bones were being held in storage wrapped in bubble wrap. However, she cherishes a photograph that was taken the last time the ‘Ballaugh Elk’ was exhibited during the 1960s.  Recently the antlers were unwrapped in 2005 for carbon dating. The future of the skeleton is now looking more secure, with new galleries being created with the intention of exhibiting it again in 2011.

Proceeds from the sale of the publication have been split between Ballaugh Parish Church and Ballaugh Heritage Trust. It is particularly appropriate that Ballaugh Parish Church should benefit, as this was where both Kewish and Taubman, and their families worshipped. Two stained glass windows within the church are dedicated to their memory, but a vestry in the building itself requires some refurbishment.