The Brownies & the Mystery of the Missing Castle Rushen Ruby

So, I’m a diehard Girl Guide (Queen’s Guide) and Girl Scout (Troop Leader) and totally adore Brownies so this story made my day. Kudos to Girlguiding, the Manx Constabulary and Manx National Heritage who have a knack for doing the right thing.


On Friday 17 September and Friday 8 October almost 300 Brownies and 50 Brownie leaders from all over the Island took part in the ‘Big Brownie Lock In’ at the Manx Museum. They thought they were coming to the Museum to watch a film – but their real mission was to solve the mystery of the missing Castle Rushen Ruby!

The Brownies arrived at the Museum at 6:00pm to learn that the world famous ‘Castle Rushen Ruby’ had been stolen from the Art Gallery, and they had to work in teams to solve the clues and locate the Ruby. With the help of the Police, Girlguiding volunteers and Manx National Heritage staff the Brownies were able to have a go at lifting finger prints, analysing hand writing samples, examining evidence, seeking out secret passageways, DNA swabbing and interviewing suspects. The Brownie teams then reported their findings back to the Police in the incident room. After examining the evidence in more detail, and with the help of some incriminating CCTV footage, the Brownies soon caught the culprit who was promptly handcuffed and taken to Douglas Police Station for further questioning. As a reward for all their efforts the girls then watched the film ‘Night at the Museum’.
The ‘Big Brownie Lock In’ was jointly organised by Manx National Heritage and Girlguiding Isle of Man to celebrate the Girlguiding Centenary. Katie King, Community Outreach & Learning Support Officer, for Manx National Heritage said “When Girlguiding Isle of Man asked Manx National Heritage whether the Brownies could ‘take over’ the Manx Museum as part of their Centenary Celebrations we were intrigued! We really wanted to make sure the girls had a memorable night, and the idea to stage a fake ‘burglary’ was formed.
I would like to say a huge thank you to Sergeant Wendy Barker and Sergeant Dean Johnson, and their team of Specials, for putting so much effort into the two evenings and adding realistic quality to the event. I would also like to thank the Museum staff who became our cast of ‘suspects’ for the night – especially as the Brownies treated them all with such suspicion! The Brownies were fantastic at solving the clues, I’m sure a lot of them will make excellent police officers when they get older!”
Julie Farrar, Girlguiding Isle of Man Lead Volunteer Museum Centenary Events, said “the opportunities that have been made available for Girlguides in association with MNH during our centenary year have been outstanding and for one Brownie, Olivia Marshall, making her Brownie promise underneath the huge Irish Elk was definitely her “mountain top moment”!  Our sincere thanks also go to Katie and the staff at the museum and to Sergeant Barker and her team for their professionalism and enthusiasm.” 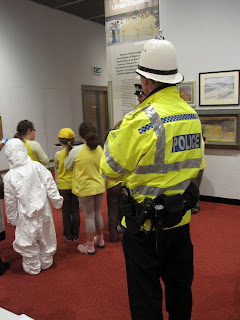 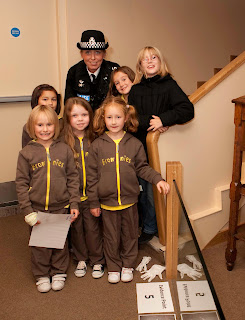 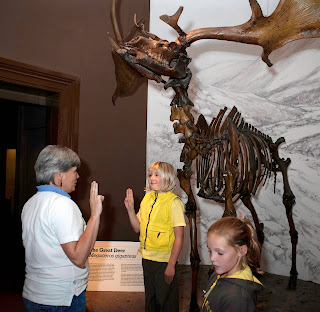 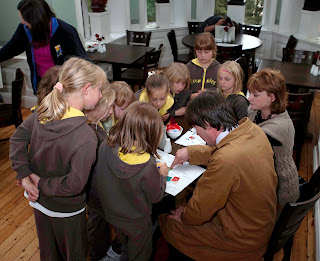 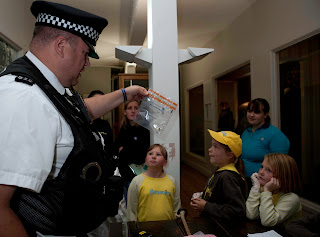 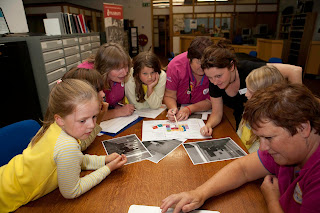