Kelly McCarthy Posted on April 6, 2010 Posted in Uncategorized
The House of Keys just held a debate on the Civil Partnerships Bill. The aim of the Bill, as explained by Allan Bell who appears to be the spokesman for this issue, is to allow same-sex couples to make a formal legal commitment to each other.

But he stressed a civil partnership was not the same as a civil marriage ceremony. ‘It is not gay marriage by another name,’ he told MHKs. ‘We are not moving to impose an alien lifestyle. It’s simply a first step towards providing equality and fairness.’

As the IOM doesn’t have a party system with ideological sides, it is interesting to note how the Island’s representatives addressed the issue. You can read more about the thoughtful, but often heated debate in an  article in IOMToday  What’s interesting too, is that the paper has obviously made its decision on which side of this debate it stands. Usually it remains impartial. It’s obviously an issue that’s generating heated feelings although as the quote below indicates, there doesn’t seem to be a big lobbying group behind this. Civil Partnerships already exist in the UK and there are many same-sex couples who have availed themselves of both a ceremony and a legal way to link assets such as pensions and estates.

But because they posted this photo, I couldn’t resist reproducing it here, even if their intention was to make a mockery of Mr. Corkish, who to be fair, does wear pink rather well. 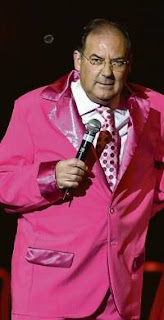 Most critical was Geoff Corkish (Douglas West) who said there was no public clamour for such a change. He said he would stick to his ‘fuddy duddy view’ that the only ‘proper marriage’ was one between a man and a woman. ‘I don’t want to appear prissy but I’m being honest to myself and many people will share my view. I speak as a member of the human race. The Isle of Man is not ready for this.’