↓ Skip to Main Content
Home › Uncategorized › The Ducati is back…

The Ducati is back… 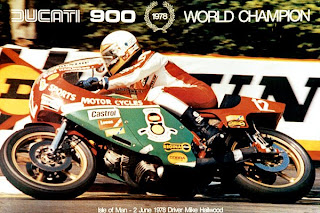 This story is just an excuse for a trip down memory lane. I remember the 1978 TT race that saw Mike Hailwood come back to win after 11 years out of bike racing. There was a truly exciting battle for first between “Mike the Bike” and Phil Reed on a Honda but the Ducati brought the victory home and with it, a 10th World Championship for Hailwood.

Now, Irish road racing champion Ryan Farquhar has been offered the legendary Hailwood Ducati to ride in the Isle of Man TT races in 2009. The Ducati, which was last raced in 1978 when Hailwood won the formula 1 TT, will be updated by a team headed by Hailwood’s son David.