Kelly McCarthy Posted on May 28, 2013 Posted in Uncategorized 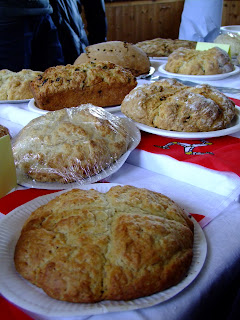 Heavy snowfall earlier this year forced organisers to reschedule the annual Manx bonnag competitions but it was standing room only at St James Church, Dalby, as everyone crowded into the schoolroom to witness one of the highlights of the village calendar.
With the pleasing aroma of fresh bonnag wafting through the old schoolroom, local farmer and radio personality John Kennaugh skilfully compered the evening’s entertainment which was dominated by a number of local singers, many of whom had competed recently at this year’s Guild. Vocalists Kelly Collard, Mike Durber and Terry Qualtrough (who stole the show with his stunning impersonation of Elvis Presley) were accompanied by Gareth Moore.
This was interspersed with a varied selection of poetry and lashings of parochial humour which gave life to diverse views of the Isle of Man, with Richard Rake choosing work by Roly and Denys Drower, Vinty Kneale and David Kelly. Meanwhile John Kennaugh recited extracts from two poems by the old master T. E. Brown which clearly showed his control of different genre.
With Bert Winckle’s retirement after many years of judging the bonnag competitions, organisers introduced Eileen Jones of Peel to judge this year’s entries which were laid out ready for assessment at the rear of the schoolroom. Separated into three categories the winners were as follows:-
Ladies            –    Anne Quirk (also the overall winner of the Isle of Man Creamery Buttermilk Cup)
Men                –    Ben Awkal
Under 15      –      Austin Rycroft
A break in the evening’s entertainment allowed members of the audience to sample a generous home-made supper, provided by the fantastic culinary team at St James Church which ensured no-one went home hungry.
Representatives from this year’s chosen charities were also on hand from Robert Owen House and the Malawi Water Project who informed the audience of work undertaken by both groups in their quest to improve the quality of life for both Manx and African families.
The evening was brought to a conclusion with a raffle and auction of competition bonnags by John Kennaugh with members of the audience vying with their neighbours to purchase the winning entries.
All proceeds from the evening will be donated to the Isle of Man Agricultural Benevolent Trust.
Valerie Caine
© May 2013