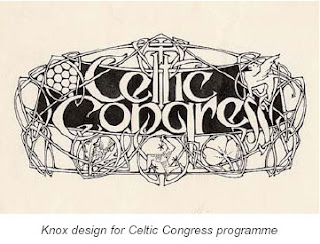 The International Celtic Congress is a cultural organisation that seeks to promote the Celtic languages of the nations of Ireland, Scotland, Wales, Brittany, Cornwall and the Isle of Man. Formed from pre-existing bodies such as the Celtic Association and the Pan-Celtic Congress, history records that meetings of an Inter-Celtic Congress took place as early as 1838 and 1867.

With a branch in each of the Celtic nations their first meeting was in 1917 at the Birkenhead Eisteddfod; they continue to meet annually in each representative country. The object of the organisation is to “perpetuate the culture, ideals and languages of the Celtic peoples, and to maintain an intellectual contract and close co-operation between the respective Celtic communities”.

Although classed as a non-political organisation the National Party of Scotland (forerunner of the Scottish National Party) sought involvement in the 1920s, and the Taoiseach of Ireland, Eamon de Valera, became their patron during the 1930s.

They should not, however, be confused with the Celtic League which split amicably from the Celtic Congress to pursue political aims, though many people are members of both organisations.

This year it’s the turn of the Isle of Man to host the International Celtic Congress, with delegates arriving from each country to enjoy an extensive itinerary of events during their stay. Each year a theme is agreed upon and this year’s chosen topic will be ‘Inter-Celtic Communications’.

Co-ordinator of this year’s event Dr. Brian Stowell commented, “Some people might say there is no need for inter-Celtic associations like the Celtic Congress nowadays, when so many Celtic activities come under political and governmental umbrellas. But independent, cultural inter-Celtic associations will always have their uses, particularly in helping people retain their identity in a friendly, benevolent way”.

The President of Tynwald, the Honourable Noel Cringle will perform the official opening on Easter Monday at the Claremont Hotel in Douglas, followed by a Gala Dinner.  Most of the events take place at the Claremont Hotel and the Loch Promenade Methodist Centre in Douglas and include lectures from each Celtic nation, tours around the Island and the opportunity to learn Manx songs with Dr. Breesha Maddrell. An Ecumenical Service will be held at the Loch Promenade Methodist Centre.

Members of the public are welcome to attend any of the nightly ceilidhs, lectures and concerts which feature during the week, the ‘Young People’s Concert’ on the 8th April features music from Beccy Hurst, Mike Boulton’s groups and the Bree traditional  youth music movement (£3 admission children free). The main concert on the 9th April includes South Uist’s Sineag Nic an t-Saoir (MacIntyre), who won the Gold Medal at the Mod 2009, Máire Ní Choilm, a sean nos singer from Gweedore, Dublin harp player Brenda Ní Ríordáin, singer Moe Kease (Cornwall), singer-songwriter Tecwyn Ifan (Wales) and the Mollag Band from the Isle of Man. (£4.00 admission children free). Please note that both concerts will take place at the Loch Promenade Methodist Centre starting at 8.00pm.

For further information regarding the International Celtic Congress, or how to join the local branch please contact bstowell@mcb.net or phone 623821