The IOM's place in the new global economy 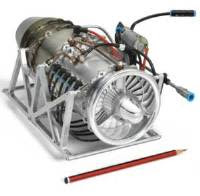 Island-based micro gas turbine company Bladon Jets has announced a partnership with Jaguar Land Rover to develop a device fitted to hybrid petrol/electric cars that charges batteries on the go.

The Ultra Lightweight Range Extender (ULRE) battery charger allows a hybrid vehicle to travel further without the inconvenience of stopping to charge the vehicle’s batteries. The ULRE could be a significant piece of technology in the evolution of the next generation of electric vehicles. Do you see how small it is??? that’s a pencil next to it.
Bladon Jets is leading a consortium that has been awarded funding from the UK government’s Technology Strategy Board to develop the ULRE.  The objective of the consortium, which includes luxury car maker Jaguar Land Rover and leading electrical machine company SR Drives, is to produce the world’s first commercially viable ULRE. Backing for the project was secured in a hotly contested £15 million funding competition organised by the Technology Strategy Board to support the advancement of the mass adoption of low carbon vehicles and is a key part of its wider programme to stimulate technology-enabled innovation and to help boost UK growth and productivity.
The ULRE will incorporate a Bladon Jets’ patented axial flow gas turbine engine coupled to a high speed generator utilising SR Drives’ technology.  Design of the ULRE’s packaging for vehicle integration will be overseen by Jaguar Land Rover.
Paul Barrett, Bladon Jets’ executive chairman said that winning the Technology Strategy Board award was a significant event not just for his company but also for the future of low carbon vehicle development in the UK.

‘We are delighted to be working with our partners Jaguar Land-Rover and SR Drives on this project and look forward to seeing our micro gas turbine engine play a major role in the renaissance of the British automotive industry,’ he said.