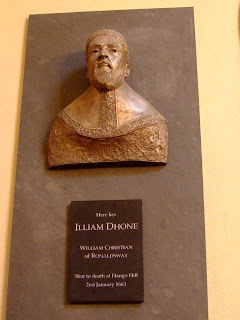 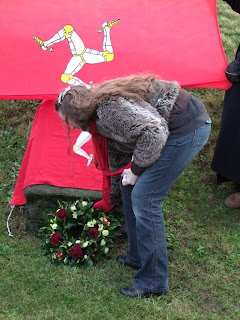 Mannin Aboo lay a wreath at Hango Hill to commemorate the death of  Illiam Dhoon on the anniversary of his execution at that place. See Illiam Cassidy’s item below for more details about Brown William.
This report is from Valerie Caine who was there and took the photos:
Annual Commemoration of Illiam Dhone
The annual commemoration of the death of Illiam Dhone (William Christian) in 1663, thought by many to be a Manx martyr,  took place at Hango Hill, Castletown, on the 2nd January, 2010.
Organised by Manx nationalist party Mec Vannin and the Manx branch of the Celtic League, a large crowd of bystanders gathered at the site of his execution to hear speeches in both Manx and English reflecting the thoughts of the Island’s population.
Although bitterly cold, impassioned speeches were made in English by Bernard Moffatt of the Celtic League and in Manx by Mark Kermode of Mec Vannin, including references to the problems facing the Island in view of the imminent axing of the reciprocal health agreement and the unprecedented change of the VAT agreement by the UK.
As the call for Manx independence grows stronger, members of a new Facebook page ‘Mannin Aboo’ (Mannin Forever) joined the onlookers as they watched Lexi Duggan of the group lay a wreath at the site of Illiam Dhone’s execution. Members of ‘Mannin Aboo’ attending the event were asked to wear something red.
As unrest increases nationalist slogans using Manx Gaelic have rapidly appeared in the west of the Island sprayed onto local roads, but the mysterious graffiti artist also left his mark on the walls opposite Hango Hill in time for the ceremony. Both ‘Mannin Aboo’ and the organisers of the commemoration, however, wish to distance themselves from these events.
As the ceremony ended with the singing of the Manx National Anthem some bystanders repaired to one of the pubs in Castletown to enjoy an afternoon music session, whilst others moved on to Malew Church for a commemoration service where Illiam Dhone is buried. The sermon was given by the Rt. Revd. Robert Paterson, Bishop of Sodor and Mann, and the elegy ‘Baase Illiam Dhone’ (The Death of Brown William) sung by Phil Gawne MHK. A wreath was laid at the memorial to Illiam Dhone in the chancel of the church.
Refreshments were later served at the Abbey Church Hall, Ballasalla.
Valerie Caine © January 2010